Posted at 18:49h in Birding by Newburyport Birders
Share 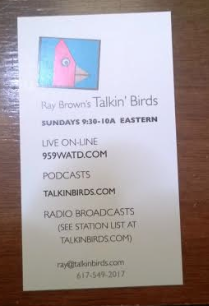 Tune in to Ray Brown’s Talkin’ Birds in 2017!
Ray Brown is a broadcast veteran with more than 3 decades of experience in commercial and public radio and television. His first gigs were at WNRI in Woonsocket, RI, and WJAR in Providence, RI. In the late 1970s, Ray landed a job at Cape Cod’s WCOD-FM, where he served as a host until he moved to Boston in the early ’90s. He’s now been broadcasting on Boston’s classical station, WCRB 99.5 FM, for fifteen years. Ray frequently hosts pledge drives for WGBH TV and radio in Boston, as well as for PBS. He’s also the voice of Simon and Schuster’s Pimsleur language-learning programs.

Beginning in February of 2015, Ray began appearing as a regular guest on National Public Radio’s Weekend Edition Saturday with Scott Simon. The topic: birds.Talkin’ Birds is a live and interactive radio show about wild birds and the beauty of nature—attracting birds to your backyard, feeding them, and learning more about them. We feature expert guests and contests for prizes like bird feeders and other bird-related items each week.Talkin’ Birds mission is similar to Newburyport Birders’:Encourage appreciation of our environment and promote the preservation and protection of natural world.