Posted at 02:23h in Birding by Newburyport Birders
Share 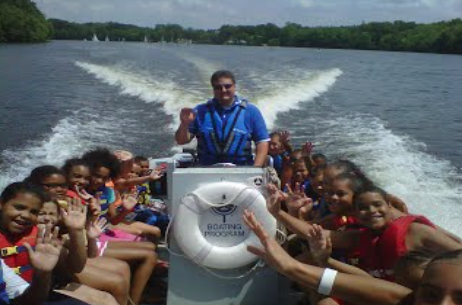 It was an unsettled forecast this morning, but we pushed it to later in the morning and had a dry outing on the Merrimack River!  I guided an enthusiastic group of 19 elementary school youngsters from Lawrence on “The Barge” with Captain Chris.  When I first arrived, the Blue Jays were vocal near the trail at the end of the parking area.  We launched from the Abe Bashara Community Boathouse.  We took time to put on our life vests, then talked about birds, the river, its health and history, plastics, foam cups, fishing line, glass, apple cores and other non-biodegradable items in the river.   I explained the perils birds encounter related to improperly disposed trash.  We witnessed a Double-crested Cormorant dangling from fishing line from a utility pole.  The banks for the Merrimack River were alive with bird song, and the young birders heard several catbirds, vireos and an oriole.  On the water, there were Chimney Swifts, blackbirds, crows and gulls.  We had some Common Grackles sitting in the shade with bills wide open. We came across Double-crested Cormorants sitting in the spread-wing position.  Cormorants use spread-wing postures only for drying their wings.  Although cormorant plumage also retains water, only the outer portion of the feathers is able to get wet, so an insulating layer of air next to the skin is maintained when cormorants swim underwater.  This difference in feather structure may explain why cormorants can spend more time foraging in the water and can tolerate cooler climates.Red-winged Blackbirds were in a shallow area.  As we passed under a bridge, we saw  Rock Pigeons.  They’re a very common sight in cities on crowded streets, making a living on discarded food and other offerings.  We had a pretty good look at a flimsy platform nest.  Pigeons reuse their nests, and they aren’t good housekeepers.  The feces of their nestlings build up over time, and the nest grows into a sturdy, pot-like mound.  We cooed under the bridge, imitating the sound the birds make. We encountered family groups of molting Canada Geese.  There were dozens of goslings swimming and attempting to climb the grassy bank. Mallards were plentiful in their post-breeding plumage.  Several were loafing on a log, and we saw their orange legs.We had several gulls overhead and saw only a few Tree Swallows.  We came across a yellow trash boom, and we saw some of the items it collected.  It was fitting as I started the program with how this river was once so polluted. We ended with some pretty strong wing flaps given it was the group’s fledgling outing…Good birding,Sue