Posted at 02:18h in Birding by Newburyport Birders
Share
On Wednesday, August 10th a small group gathered at Lot # 1 on Parker River National Wildlife Refuge joined Sue for a birding program focused on the importance of the Refuge during bird migration. Plum Island is one of the finest places for viewing birds during fall migration. Many bird species are moving south along the coast. On Plum Island, the extensive mudflats, the salt marshes, the salt pannes & the pools are excellent feeding areas & roosting sites for these migrants.
We were headed south after a stop at Hellcat and came across an unusual bird sallying for insects with a few Eastern Kingbirds.  I immediately noted that the tail of this bird was forked.  It was longer and sleeker than the kingbirds around it.  We flew out of the vehicle and watched it fly, forage and perch.  Two of the three participants had cameras.  Document shots were taken.  I texted several of Plum Island’s daily faithful with a pic of the Fork-tailed Flycatcher.  We stayed on the bird for a half hour the bird has not been relocated since 8/10. 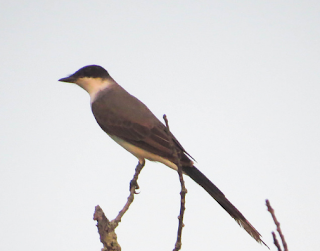 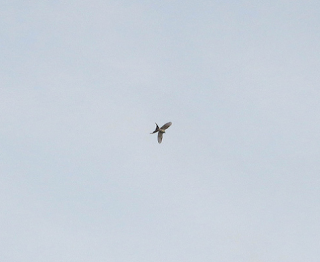